BENEFITS AND FUNCTIONS OF PLANT ROOTS 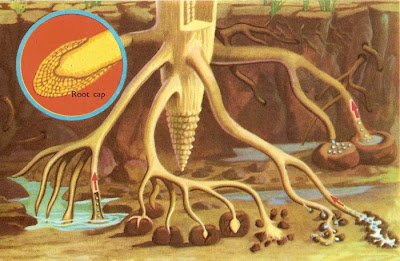 Roots of  plants are an important part affecting the growth and life of the plant. Root including vegetative organs of plants, in addition to the stem and leaves .

There are three functions that are important to the plant roots are:

First roots develop from seed is the main root. It produces many branches called secondary roots. Secondary roots produce their own branches. There are two main types of root systems, taproot or fibrous. In a taproot system, the primary root grows straight down and called the taproot.
Taproot still larger than the secondary roots throughout the plant life. In some plants, including beets and carrots, taproot being fat (bloated). Grass is an example of a plant with a fibrous root system in such a system, the primary roots do not stay more than the others. Many thin secondary roots growing in all directions. A fibrous root system can be very broad. For example, the roots of wheat plants may have a combined length of approximately 380 miles (612 kilometers).
Some plants have modified roots that perform specific functions. Roots that grow from the roots or branches primer called adventitious roots. They include supporting the roots of corn and some other crops. Prop roots grow into the soil from the bottom of the stem and helps hold plants upwind. Some species of orchids and other plants that live in the branches of a tree issuing aerial roots, which are attached to the branches. Aerial roots absorb water and minerals from the surface of the tree and from the air. Parasite is one of the few plants with roots that penetrate the tree body. The roots, called sinkers, absorb food, water, and minerals directly from the tree .