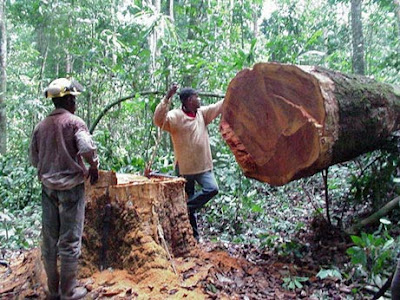 When people build cities or cut down forests to obtain wood or to clear land for farming, they destroy the habitats that animals need to survive. The habitats of animals in tropical forests are particularly threatened today. People are rapidly cutting down these forests to obtain such valuable hardwoods as mahogany and teak. They are also clearing the land to plant crops. However, soils in such areas are not especially fertile, and farms there produce crops for only a few years. To continue farming in such areas, people have to keep cutting down more of the forests to create new farmland. By the early 1990's, about two-fifths of the world's tropical forests had already been destroyed.

Many scientists and other people are especially concerned about the destruction of tropical forests. They point out that these forests have more biodiversity-that is, a greater variety of plant and animal species-than any other place. One square mile (2.6 square kilometers) of forest in South America may have more species of birds and insects than many countries do. In fact, biologists discovered a single tree in a tropical forest in Peru that supported 43 species of ants. That is as many species of ants as live in the entire United Kingdom.

Even though many types of plant and animal life can be found in one place in the tropics, the total range of many tropical species is extremely small. As a result, when a large area of forest is cleared, all the members of some species are killed.

Pollution. Various types of pollution can also destroy animals and their habitats. Agricultural chemicals and industrial wastes sometimes drain into ponds and streams and kill the plants and animals there. Air pollution produced by factories that burn such fossil fuels as coal and oil has seriously damaged forests and wildlife. Acid rain-rainfall with a high concentration of sulfuric and nitric acids due to air pollution-kills fish and other animals.