The Structure of Forests

Every forest has various strata (layers) of plants. The five basic forest strata, from highest to lowest, are (1) the canopy, (2) the understory, (3) the shrub layer, (4) the herb layer, and (5) the forest floor. 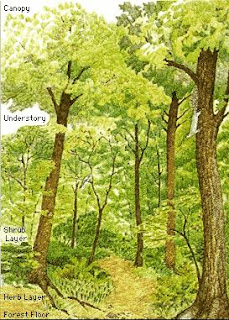 The canopy consists mainly of the crowns (branches and leaves) of the tallest trees. The most common trees in the canopy are called the dominant trees of the forest. Certain plants, especially climbing vines and epiphytes, may grow in the canopy. Epiphytes are plants that grow on other plants for support but absorb from the air the water and other materials they need to make food. The canopy receives full sunlight. As a result, it produces more food than does any other layer.

In some forests, the canopy is so dense it almost forms a roof over the forest. Fruit-eating birds, and insects and mammals that eat leaves or fruit, live in the canopy. 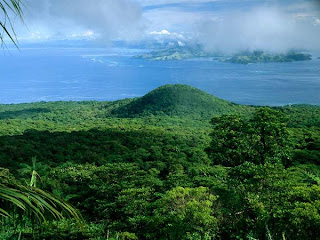 The shrub layer consists mainly of shrubs. Shrubs, like trees, have woody stems. But unlike trees, they have more than one stem, and none of the stems grows as tall as a tree. Forests with a dense canopy and understory may have only a spotty shrub layer. The trees in such forests filter out so much light that few shrubs can grow beneath them. Most forests with a more open canopy and understory have heavy shrub growth. Many birds and insects live in the shrub layer. 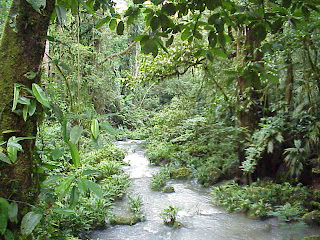 The herb layer consists of ferns, grasses, wildflowers, and other soft-stemmed plants. Tree seedlings also make up part of this layer. Like the shrub layer, the herb layer grows thickest in forests with a more open canopy and understory. Yet even in forests with dense tree layers, enough sunlight reaches the ground to support some herb growth. The herb layer is the home of forest animals that live on the ground. They include such small animals as insects, mice, snakes, turtles, and ground-nesting birds and such large animals as bears and deer. 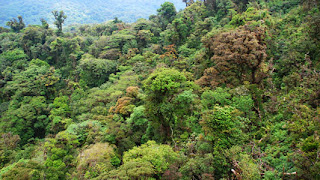 The forest floor is covered with mats of moss and with various objects that have fallen from the upper layers. Leaves, twigs, and animal droppings-as well as dead animals and plants-build up on the forest floor. Among these objects, an incredible number of small organisms can be found. They include earthworms, fungi, insects, and spiders, plus countless bacteria and other microscopic life. All these organisms break down the waste materials into the basic chemical elements necessary for new plant growth.