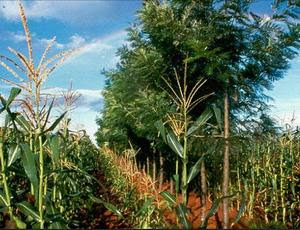 Each of the more than 260,000 species of plants differs from every other species in one or more ways. However, plants also have many features in common. Based on these similarities, scientists are able to classify distinct plants into groups. The study of plants is called botany, and scientists who study plants are known as botanists.

This section describes the chief kinds of plants found in the plant kingdom. It is divided into five basic groups: (1) seed plants, (2) ferns, (3) lycopsids, (4) horsetails, and (5) bryophytes. A table showing a more detailed system of plant classification that is used by many botanists appears at the end of the article.

Seed plants consist of a wide variety of plants that bear seeds to reproduce. Most botanists divide the seed plants into two main groups of plants-angiosperms and gymnosperms.

Angiosperms are flowering plants. They make up the vast majority of the more than 260,000 kinds of plants. They produce seeds that are enclosed in a protective seed case. The word angiosperm comes from two Greek words meaning enclosed and seed. All plants that produce flowers and fruits are angiosperms. They include most of our common plants, such as brightly colored garden plants, many kinds of wildflowers, and most trees, shrubs, and herbs. Most of the plants that produce the fruits, grains, and vegetables that people eat also are angiosperms.

The sizes of angiosperms vary greatly. The smallest flowering plant, the duckweed, is only about 1/50 inch (0.5 millimeter) long. It floats on the surface of ponds. The largest angiosperms are eucalyptus trees. They grow more than 300 feet (91 meters) tall.

Gymnosperms include a wide variety of trees and shrubs that produce naked or uncovered seeds. Most gymnosperms bear their seeds in cones. The word gymnosperm comes from two Greek words meaning naked and seed. Gymnosperms do not produce flowers. This group is made up of such plants as conifers, cycads, ginkgoes, and gnetophytes. .

Conifers are the best known of the gymnosperms. They include such trees as cedars, cypresses, firs, pines, redwoods, and spruces. Most conifers have needlelike or scalelike leaves. Their seeds grow on the upper side of the scales that make up their cones. The cones of some conifers, such as junipers, look like berries. Most conifers are evergreens-that is, they shed old leaves and grow new leaves continuously and so stay green throughout the year. Wood from conifers is widely used in construction and papermaking. Conifers also provide animals with food and shelter.

Cycads and ginkgoes have lived on Earth for millions of years. Large numbers of these plants once grew over wide regions of land. Most cycads look much like palm trees. They have a branchless trunk topped by a crown of long leaves. But unlike palm trees, they bear their seeds in large cones. Only one kind of ginkgo survives today. It is an ornamental tree with flat, fan-shaped leaves. It bears seeds at the ends of short stalks along its branches.

Ferns grow chiefly in moist, wooded regions. They vary widely in size and form. Some aquatic ferns have leaves only about 1 inch (2.5 centimeters) long. But in the tropics, tree ferns may grow more than 65 feet (20 meters) high.

Fern leaves, called fronds, usually are made up of many tiny leaflets and may be quite large. On most types of ferns, the fronds are the only parts that grow above the ground. They grow from underground stems that may run horizontally under the surface of the ground. When the fronds first appear, they are tightly coiled. The fronds unwind as they grow.

During prehistoric times, great numbers of large ferns covered Earth. These ferns, along with giant club mosses and horsetails, accounted for much of the plant life that later formed coal. See FERN.

Lycopsids include club mosses, quillworts, and selaginellas. These plants have leaves with a single, central vein. Lycopsids were among the first plants to grow on land.

Club mosses have tiny needlelike or scalelike leaves that usually grow in a spiral pattern. They are not true mosses. Club mosses are found from tropical to temperate regions. They often form a "carpet" on the forest floor.

Quillworts are found chiefly in moist soils around lakes and streams. They have short stems and long, grasslike leaves. The leaves usually grow to about 14 inches (36 centimeters) long. Ancient plants related to quillworts were large trees that grew up to 120 feet (37 meters) tall. These plants lived about 290 million years ago.

There are about 700 kinds of selaginellas. These plants are usually found in tropical and subtropical regions. They often grow in damp places on the forest floor. Selaginellas have small thin leaves. Their stems may either grow upright or along the ground. These plants first appeared on earth over 300 million years ago.

Horsetails are a group of small plants that have hollow, jointed stems. Horsetails grow about 2 to 3 feet (60 to 90 centimeters) tall. The plants have green stems and tiny, black leaves. The stems capture the sunlight used by the plant to make food in photosynthesis. In some horsetails, the branches grow in whorls (circles) around the main stem of the plant, and the plant resembles a horse's tail. Tiny amounts of minerals are concentrated in the stems of horsetails, including gold and silica. Silica makes the stems very coarse, like sandpaper. Some kinds of horsetails are called scouring rush because people once used these plants to scour their pots and pans.

Bryophytes are a group made up of liverworts, mosses, and hornworts. These plants live in almost all parts of the world, from the Arctic to tropical forests. They grow in such moist, shady places as forests and ravines. Bryophytes are the only types of plants that lack vascular tissue-that is, tissue that carries water and food throughout the plant.

Most liverworts, mosses, and hornworts measure less than 8 inches (20 centimeters) tall. None of these plants have true roots. Instead, they have hairy rootlike growths called rhizoids that anchor the plants to the soil and absorb water and minerals.

Peat moss, a substance made up of thick growths of Sphagnum and other mosses, is often used in gardening. Gardeners mix peat moss into the soil to keep the soil loose and to help it hold moisture.