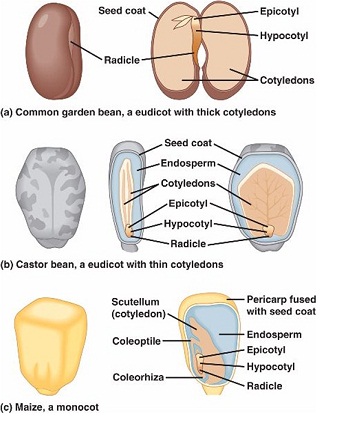 Definition of Seed is the specialized part of a plant that produces a new plant. It contains an embryo (partly developed plant) that consists of an immature root and stem. A seed also has a supply of stored food and a protective covering.

Seeds are produced by approximately 250,000 kinds of plants. Flowering plants make up the largest group of seed-producing plants. These plants, which botanists call angiosperms, include the vast majority of trees, shrubs, and soft-stemmed plants. Seeds are also produced by about 800 kinds of trees and shrubs called gymnosperms. Most gymnosperms develop cones.

The seeds of different kinds of plants vary greatly in size. The double coconut tree produces the largest seed, which weighs up to 50 pounds (23 kilograms). On the other hand, orchid seeds are so tiny that 800,000 of them weigh no more than an ounce (28 grams). The size of a seed has no relationship to the size of the plant that develops from it. For example, the giant redwood tree grows from a seed only 1/16 inch (1.6 millimeters) long.

The number of seeds produced by an individual plant varies according to the size of the seeds. A coconut tree has only a few large seeds, but an orchid or pigweed plant produces millions of tiny ones.