The terms symbiotic and mutualistic have been used interchangeably to describe mycorrhizal associations. Symbiosis was originally used to define both lichens and parasites, but many scientists now use this term to describe beneficial associations only. Fungal symbioses have been defined as ‘all associations where fungi come into contact with living host from which they obtain, in a variety of ways, either metabolites or nutrients’. However, this definition excludes associations of myco-heterotrophic plants that are entirelysupported by a fungus. Only the broadest definition of symbiosis (e.g. ‘living together of two or moreorganisms’) applies universally to mycorrhizal associations. 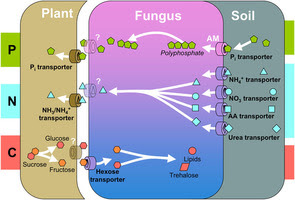 THE TERM OF MYCORRHIZA

The term mycorrhiza (meaning fungus-root) was originated by Frank (1885), who was fairly certain that these symbiotic plant-fungus associations were required for the nutrition of both partners. More recently, mycorrhizas have been defined as associations between fungal hyphae and organs of higher plants concerned with absorption of sub stances from the soil. Broader definitions have also been published, but are of little value as they do not exclude pathogenic associations. Mycorrhizas are now considered to differ primarily from other plant-fungus associations because they are intimate associations with a specialised interface whereexchange of materials occurs between living cells.

MOST MYCORRHIZAS OCCUR IN ROOTS


Most mycorrhizas occur in roots, which evolved to house fungi, but they also occur in the subterranean stems of certain plants and the thallus of bryophytes. Pathogenic associations also involve intimate plant-fungus contact, but differ from mycorrhizas because they lack fungus to plant nutrient transfer, and are highly detrimental to their host plants – resulting in disease symptoms. Pathogenic fungi are typically not specialised for efficient mineral nutrient acquisition from soil. A new, broader definition of mycorrhizas that embraces the full diversity of mycorrhizas while excluding all other plant-fungus associations is presented here.


Definition of Mycorrhiza is a symbiotic association essential for one or both partners, between a fungus (specialised for life in soils and plants) and a root (or other substrate-contacting organ) of a living plant, that is primarily responsible for nutrient transfer. Mycorrhizas occur in a specialised plant organ where intimate contact results from synchronised plant-fungus development.