NEEDLELEAF TRESS ARE ABOUT 500 SPECIES 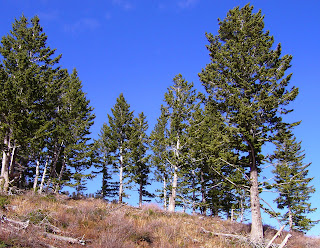 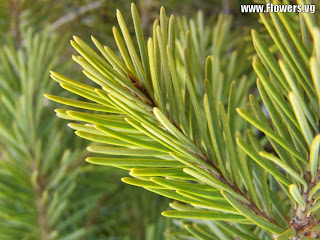 Needleleaf trees belong to a group of plants called gymnosperms. Gymnosperms do not have flowers and their seeds are not enclosed to form fruits. Most gymnosperm trees bear their seeds in cones composed of hard scales. The seeds lie open on the surface of the scales. Botanists call such trees conifers.

Most conifers grow north of the equator. The conifers belong to four families-the pine, yew, cypress, and taxodium families. The pine family is by far the largest. It includes not only pines, but also such trees as firs, hemlocks, larches, and spruces. Pine trees make up a large genus (group of species) within the pine family. Loblolly pines, ponderosa pines, and white pines are a few North American members of this genus. The yew family includes such well-known ornamental trees as English yews and Japanese yews. Although yews are classified as conifers, they do not produce cones but cup-shaped "berries." Many members of the cypress family, such as arborvitae and junipers, have scalelike leaves and give off a spicy fragrance. The taxodium family includes baldcypresses and the largest of all living trees-the redwoods and giant sequoias.

Two conifer families-the podocarpus family and the araucaria family--grow mainly south of the equator. Podocarpus trees are tall evergreens with broader leaves than those of most needleleaf trees. The araucaria family includes the Chile pine. This strange-looking tree has snakelike branches covered with sharp, scaly leaves. It is sometimes called the monkey puzzle tree because its sharp leaves make it difficult to climb.