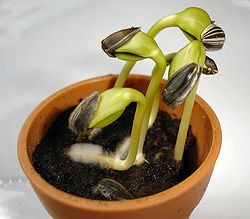 Ripe seeds sprout through a process called germination. After being dispersed, most seeds remain dormant instead of germinating immediately. Dormancy prevents seeds from sprouting when conditions are not favorable for growth. For example, many seeds remain dormant during the cold winter months and germinate after temperatures start to rise in spring.

Seeds can remain dormant for varying periods and still be viable--that is, able to germinate under proper conditions. In general, the period of viability ranges from a few weeks to 50 years. In one case, however, scientists found that dormant 10,000-year-old lotus seeds could germinate when conditions were favorable for growth.

Conditions required for seed germination include abundant water, an adequate supply of oxygen, and proper temperatures. When a seed begins to germinate, it absorbs large amounts of water. The water causes many chemical changes inside the seed. It also causes the seed's internal tissues to swell and break through the seed coat. Water also softens the seed coat so that it breaks apart more easily.

Germinating seeds require an adequate amount of oxygen to support their high rate of respiration. Respiration is the taking in of oxygen and the giving off of carbon dioxide. This process enables a germinating seed to burn food and thus produce energy for growth. 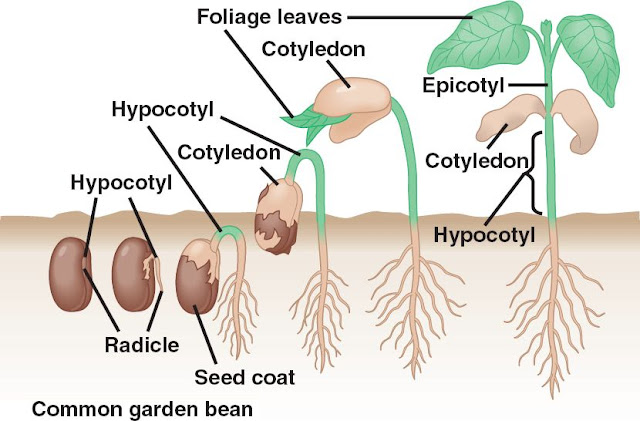 Some kinds of seeds need a certain amount of daylight to germinate. Many seeds will sprout only during the spring, when the number of daylight hours increases. Others sprout only in late summer or early fall, as days shorten.

After the seed coat breaks and germination starts, the part of the embryo below the cotyledon begins to grow down into the soil. This part, called the hypocotyl, develops into the primary root. The developing roots anchor the seedling and absorb minerals and water that the embryo needs for further growth. The upper part of the embryo, called the epicotyl, has a bud called a plumule at its tip. The epicotyl grows longer and pushes the plumule upward above the ground. The plumule then produces the first leaves.

In the seeds of gymnosperms and certain dicots, the cotyledons are also carried above the ground. They remain on the plant until it has formed new leaves that can manufacture food. The cotyledons of monocots and some other dicots remain below the ground as the plumule emerges.