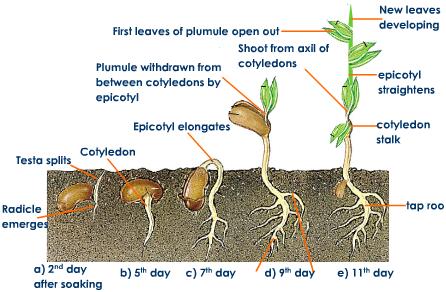 Seed formation results from sexual reproduction, in which a sperm (male sex cell) unites with an egg (female sex cell). The production of sperm and egg cells in seed plants involves a number of complicated steps. First, the male and female reproductive organs of the plant produce microscopic cells called spores. The spores grow into gametophytes, which are actually tiny plants that live within the reproductive organs of the parent plant. The gametophytes produce the sperm and egg cells.

The development of a seed begins with cell divisions in the ovule and in the anther. These cell divisions result in the production of spores. In most plants, one spore in each ovule grows into a microscopic female plant, the megagametophyte. This tiny female plant produces one egg cell. In the anther, the spores grow into microscopic male plants called microgametophytes, or pollen grains. Each pollen grain produces two sperm cells.

For fertilization to occur, a pollen grain must be transferred from the anther to the pistil. This transfer is called pollination. Pollen grains are carried from the anther to the stigma by insects or other animals or by the wind. After the pollen reaches the stigma, the grain produces a long, slender pollen tube. This tube grows down through the style and into the ovule. The two sperm cells travel down the tube to the ovule. There, one sperm cell fertilizes the egg cell, and an embryo starts to form. The other sperm cell joins with two bodies called the polar nuclei, and the endosperm begins to develop. After fertilization, the outer layers of the ovule develop into the seed coat. 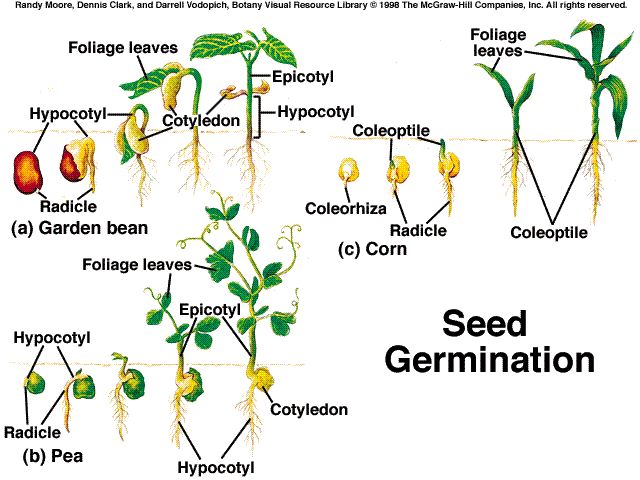 Seed development in gymnosperms. The reproductive organs of gymnosperms take many forms. In conifers, these organs are in cones. A conifer has two kinds of cones, female seed cones and male pollen cones. Each scale of a seed cone has two ovules on its upper surface. Cell divisions occur in the ovules, and each ovule produces a spore that grows into a megagametophyte. This tiny female plant produces egg cells. The scales of a pollen cone have structures that undergo cell divisions and produce spores. These spores develop into pollen grains.

The wind carries pollen grains from the pollen cones to the seed cones. The pollen gets stuck to a sticky substance near the ovules and begins to grow pollen tubes. Each pollen grain has two sperm cells. After the pollen reaches an ovule, one of the sperm cells fertilizes the egg cell, forming the embryo. The other sperm cell disintegrates. The megagametophyte becomes the food storage tissue of the seed. The seed coat develops from the outer layers of the ovule.