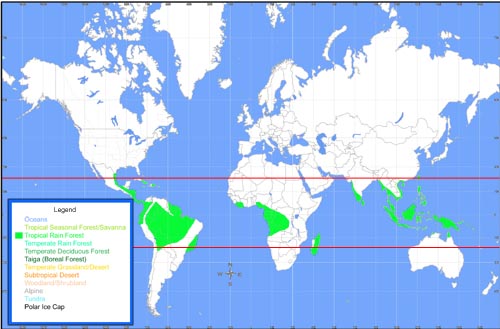 The Tropical forests exist with some essential facts of geography and climatic systems. By definition, ‘the tropics’ lie between 23o N and 23o S latitude, the area within which the sun lies directly overhead at some point in its seasonal progression.

The flux of solar energy within this region is high, due to the fact that incoming sunlight is projected at a 90o angle to the surface of the earth. This high solar energy flux results in a high rate of water evaporation over the tropical oceans and of evapotranspiration over tropical land surfaces. 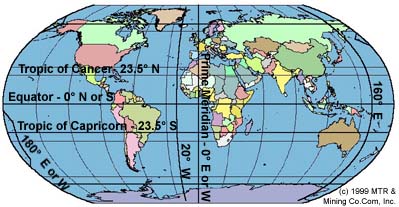 The result is a rising column of warm, moist air at tropical latitudes. As this air rises it cools as a result of the gradient in air pressure through the atmosphere (adiabatic cooling). Water condenses out from this air mass, generating rainfall. The air mass ultimately dries out, and is carried poleward from the tropics as a part of wind circulation patterns known as Hadley cells.

At subtropical latitudes near 23–30o N and S, the now-dry air mass descends, creating a region of high pressure that corresponds closely to the world distribution of deserts. As a consequence of these climatic circulation patterns, the earth’s equatorial zone is warm and wet, corresponding to the broad band of tropical forests found along the earth’s equatorial axis.