WHAT IS THE SAVANNA | Savanna is a grassland with widely scattered trees and shrubs. 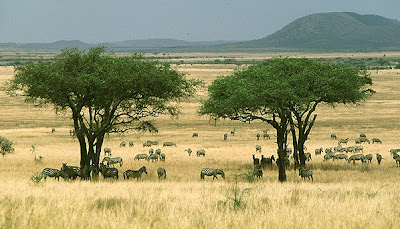 Savanna is a grassland with widely scattered trees and shrubs. Most savannas are in the tropics and lie between deserts and rain forests. Certain grasslands in temperate areas are also sometimes called savannas. This article discusses tropical savannas. For information about other savannas.

Savannas cover more than two-fifths of Africa and large areas of Australia, India, and South America. They occur in regions that have both rainy and dry seasons.

Most savanna grasses grow in clumps and do not form a continuous cover of sod. Other nonwoody plants, including members of the composite and legume families, grow among the grasses. Acacias, baobabs, and palms are some common savanna trees.

The growth of trees on savannas is limited by the dry season, which may last up to five months. When the dry season begins, grasses stop growing and turn brown, and most trees shed their leaves. Only the most drought-resistant trees can survive. During the dry season, frequent brush fires destroy many young trees. Grasses have extensive root systems that survive the fires and send up fresh shoots as soon as the rains return. On some savannas, poor drainage and other soil conditions also favor the growth of grasses instead of trees.

A wide variety of animals live on savannas. Large herds of antelope and zebras graze on the African savannas. Cheetahs, hyenas, lions, and other meat-eaters prey on these animals. Many rodents, birds, reptiles, and insects also inhabit savannas.