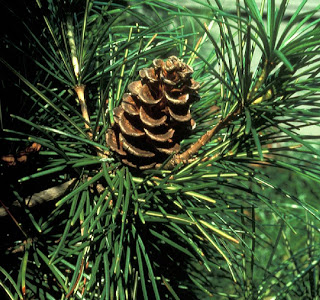 Gymnosperm,  is the name of one of two large groups of seed plants. The plants have naked, or uncovered, seeds. The term gymnosperm comes from two Greek words meaning naked and seed. The other group, called the angiosperms, consists of plants whose seeds have a protective ovary (seed case).


The gymnosperms are a group of seed-producing plants that includes conifers, cycads, Ginkgo, and Gnetales. The term "gymnosperm" comes from the Greek word gymnospermos (γυμνόσπερμος), meaning "naked seeds", after the unenclosed condition of their seeds (called ovules in their unfertilized state). Their naked condition stands in contrast to the seeds and ovules of flowering plants (angiosperms), which are enclosed within an ovary. Gymnosperm seeds develop either on the surface of scales or leaves, often modified to form cones, or at the end of short stalks as in (Ginkgo).

The gymnosperms and angiosperms together compose the spermatophytes or seed plants. By far the largest group of living gymnosperms is the conifers (pines, cypresses, and relatives), followed by cycads, Gnetophytes (Gnetophyta, Ephedra and Welwitschia), and Ginkgo (a single living species).

Gymnosperms are vascular seed plants that display very prominent and large bodies, mainly in evergreen tree form. During the ancient past gymnosperms dominated the landscape with their size and abundance. However, in modern times, gymnosperms are represented by less than one thousand species.

The Structure of Gymnosperm Types

Coniferophyta (Conifers) The basic body plan of conifer is that of an evergreen tree. Evergreen in the fact that most of these trees do not drop all their leaves (or in this case, needles) at once in the fall and grow them all back at once in the spring as do deciduous trees. Larches and bald cypress trees are an exception, however.

Many of the gymnosperms are evergreen with a wide variety in the structure of the leaves. They do not bear flowers. Tiny male cones produce the pollen, which is usually spread by the wind. The naked, or exposed, seeds are borne between the scales of the female cones and drop when they become ripe. Gymnosperms provide the source of many valuable products such as tar, turpentine, rosin, and timber.