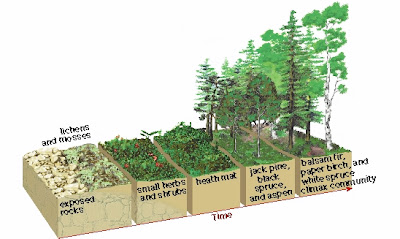 To illustrate how a forest develops and succession occurs, let us imagine an area of abandoned farmland in the Southeastern United States. The abandoned land will first support communities of low-growing weeds, insects, and mice. The land then gradually becomes a meadow as grasses and larger herbs and shrubs begin to appear. At the same time, rabbits, snakes, and ground-nesting birds begin to move into the area.

In a few years, young pine trees stand throughout the meadow. As the trees mature, the meadow becomes an intermediate forest of pines. The meadow herbs and shrubs die and are replaced by plants that grow better in the shade of the pine canopy. As the meadow plants disappear, so do the food chains based on them. New herbivores and predators enter the area, forming food chains based on the plant life of the pine forest.

Years pass, and the pines grow old and large. But few young pines grow beneath them because pine seedlings need direct sunlight. Instead, broadleaf trees-particularly oaks-form the understory. As the old pines die, oaks fill the openings in the canopy. Gradually, a mixed deciduous-evergreen forest develops.

But the succession is still not complete. Young oaks grow well in the shade of the canopy, but pines do not. Therefore, a climax oak forest may eventually replace the mixed forest. However, pine wood is more valuable than oak wood. For this reason, foresters in the Southeastern United States use controlled fires to check the growth of oaks and so prevent climax forests from developing.

Different successional series occur in different areas. In southern boreal regions, for instance, balsam fir and white spruce dominate the climax forests. If fire, disease, or windstorms destroy a coniferous forest, an intermediate forest of trembling aspen and white birch may develop in its place. These deciduous trees grow better in direct sunlight and on unprotected, bare ground than do fir and spruce.

The aspen-birch forest provides the protection young boreal conifers need, and soon spruce and fir seedlings make up most of the understory. In time, these conifers grow taller than the aspen and birch trees. Deciduous species cannot reproduce in the shade of the new canopy, and eventually the climax forest of fir and spruce trees is reestablished.