Soil is essential for the growth of plants, which in turn provide food for animals and human beings. Soil consists chiefly of minerals mixed with organic (plant and animal) matter. Soil forms from rocks and similar materials that are broken up into smaller particles by physical and chemical processes called weathering. The particles become mixed with humus, a substance formed from plant and animal remains. Bacteria in the soil break down the humus into nutrients needed by plants.

The thin layer of fertile soil that covers much of the land was formed by natural processes over thousands of years. But in many areas, careless human practices have destroyed the soil in just a few years.

Rain, wind, and other natural forces gradually wear away the soil. This process, called erosion, normally occurs slowly. But people have greatly increased the rate of soil erosion by removing natural vegetation to clear land for construction projects, mines, or farmland. Plants protect soil from rain and wind. Their roots form an underground network that holds soil in place. Plants also absorb some rain water so that less runs off the land. Thus, fewer soil particles are washed away.

Soil erosion has long been a major conservation problem, especially on croplands. In the United States, soil erosion has severely damaged millions of acres or hectares of land. Much of the soil eroded each year ends up in lakes, streams, and rivers.

Farmers can reduce soil erosion by planting trees and leaving patches of natural vegetation between their fields and on other unplowed areas. The trees serve as windbreaks, and the plant cover slows the runoff of rain water. Many farmers also practice such soil conservation methods as contour plowing, strip cropping, terracing, and minimum tillage. 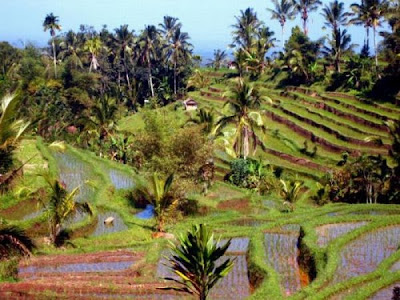 Contour plowing is practiced on sloping land. Farmers plow across a slope, instead of up and down. The plowed soil forms ridges across the slope. The ridges help slow the flow of rain water.

Strip cropping also helps slow the flow of rain water down a slope. Farmers plant grass, clover, or other close-growing plants in strips between bands of corn, wheat, or other grain crops. Grass and clover hold water and protect the soil better than grain crops do.

Terracing helps prevent soil erosion on hillsides. Farmers build wide, flat rows called terraces on the hillsides. A terraced hillside resembles a large staircase. The terraces hold rain water and so prevent it from washing down the hillside and forming gullies.

Minimum tillage, also called conservation tillage, consists of several methods of reducing the number of times a field must be tilled. Normally, farmers till their fields three or more times each growing season. One form of minimum tillage is called zero-tillage or no-till. After harvesting a crop, farmers leave the residues (remains) from the crop on the field as a covering for the soil, instead of plowing them under. During the next planting, the farmer prepares the seedbed with a device that leaves the residues between the crop rows. Zero-tillage not only provides cover for the soil but also conserves tractor fuel.

Another major conservation problem on farmlands is declining soil fertility, which is caused partly by planting the same crop in a field year after year. Corn, wheat, and other grain crops drain the soil of an essential chemical called nitrogen if they are grown on the same field for several years. Farmers can maintain the fertility of the soil by practicing crop rotation, in which crops are alternated from year to year. The rotation crop is usually a legume, such as alfalfa or soybeans. Unlike corn and wheat, legumes restore nitrogen to the soil.

Some farmers add plant remains or manure (animal wastes) to their fields to enrich the soil. Many use chemical fertilizers for this purpose. However, excessive use of some chemical fertilizers may decrease the ability of bacteria to decay humus and produce nutrients naturally. As a result, the soil may gradually harden and lose much of its ability to absorb rain water. The soil then erodes more easily. In addition, the chemicals from fertilizers may wash out of the soil and enter lakes, streams, and even wells, polluting the water. Excessive use of pesticides causes similar problems.

A common problem on irrigated farmland is the build-up of various chemical salts in the soil. Most irrigation water contains small amounts of these salts. In time, the salts accumulate in the soil and may reduce plant growth and ruin cropland.