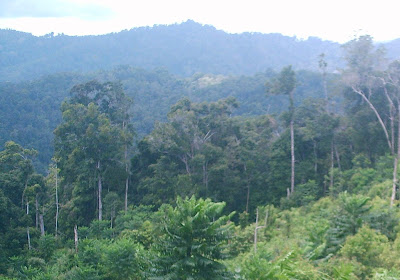 Many experts mendiskripsi tropical rainforests as a specific ecosystem, which can only stand firmly with the links between the constituent components as a unified whole. The linkage between the constituent components allows certain forms of forest structure that can provide a specific function as well as economic stability, high biological productivity, hydrological cycles are adequate and others. The reality on the groung, forest type has a very low soil fertility, soil composed of negatively charged clay particles such as kaolinite and illite low.

The condition of forest land also shows the uniqueness and distinctive characteristics. The biological activity of the soil rests on a layer of soil over the top (top soil). The biological activity of these about 80% are in top soil only. The facts indicate that the tropical rainforest ecosystems are fragile ecosystem, because each component can not stand alone. Besides, it was found that some other phenomenon is the existence of high diversity between sites or groups of both the forest and the growth of vegetation (Marsono, 1991).

Reduction efforts and prevention of tropical forest destruction in Indonesia is an urgent matter. Otherwise tropical forests will be lost due to logging activities, mining, human settlements, agricultural land clearing, forest fires and conversion to other forms.

Email ThisBlogThis!Share to TwitterShare to FacebookShare to Pinterest
Label: CHARACTERISTIC OF INDONESIAN RAINFORESTS, Characteristics of rain forests, DEFINITION OF RAINFOREST, rainforest, types of rainforests, WHAT IS A RAINFOREST
Newer Post Older Post Home