CAUSES OF FOREST FIRES IN INDONESIA 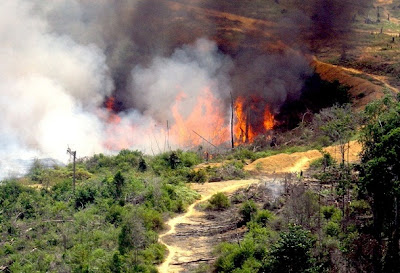 One of the things that is often blamed for prolonged droughts due to the impact of El Nino so that the land becomes dry. Natural dry conditions facilitate the expansion of forest fire very quickly.

The opening of the road through the forest made by the government and private entrepreneurs towards facilitating access to parts of the forest that was once difficult to reach. Easy access to the forest gives a fresh breeze to the forest encroachers open up new land for farming and gardening. The traditional way of clearing land by burning finally done by these people.

Deforestation for the purpose of industrial wood timber or by reason of the opening of plantations by large capital entrepreneurs, both legal and illegal. Logging followed also by the community to meet immediate economic needs.

Utilization and conversion of land that was once tropical rainforest humid, reduced humidity. Ability to store rainwater that falls seep into the soil is also reduced due to the low levels of tree density. If the felled trees on peat forest, sunlight can enter directly into the forest floor. The more extensive the larger cutting area hiatus created. Peatland from drying out and is the fuel that sparked forest fires and land. Forests in Sumatra and Kalimantan are the areas that are burned each year.

Rapid increase in the number of people making the finding and opening new lands settlement. Target is a forest that has not been inhabited by people. The rivalry between the settlers and the natives sometimes cause social jealousy. The success of the efforts of migrant communities in the process of land to make the natives feel unrivaled. The actions of other people's land burning may occur due to a sense of dissatisfaction.

Those are some of the causes of land and forest fires in Indonesia. Preventive efforts need to be done rather than the actions of forest fire extinguish itself at a cost and greater losses. Control measures requires the intervention of all parties to get involved in addressing the causes of forest and land fires.