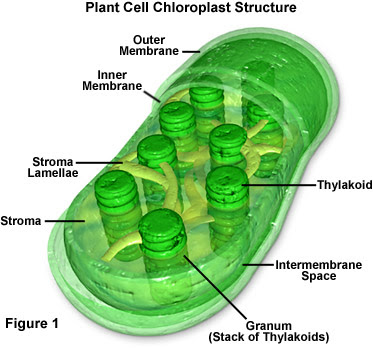 Chlorophyll is the green pigment in plants that absorbs light energy for use in photosynthesis. Chlorophyll also is found in simple organisms called algae and in some bacteria. Most plant cells do not produce chlorophyll unless the plant is exposed to light. This is why plants kept away from light are white or yellow rather than green. Chlorophyll is located in disk-shaped membranes called thylakoids within cells. In most plants, thylakoids are contained in tiny cell bodies called chloroplasts. The chloroplasts in the leaves of plants carry out all the essential processes of photosynthesis. Light energy absorbed by chlorophyll is channeled to specialized reaction centers in the thylakoids. The reaction centers, along with electron-carrier molecules, convert the light energy to chemical energy. Oxygen is released in the process.

Chemical energy is needed for taking carbon dioxide from the air, eventually leading to the production of sugars and such other food substances as starch, fat, protein, and vitamins. 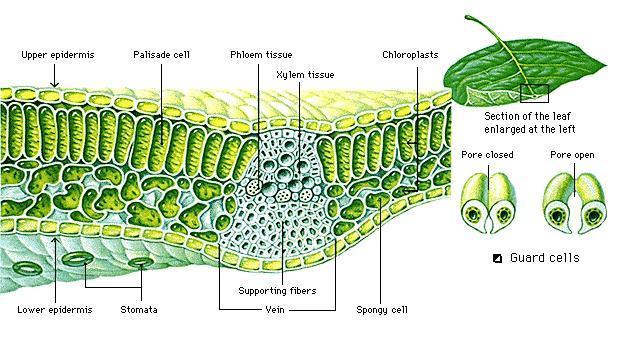 Chloroplast, is a specialized structure within the cells of plants. Chloroplasts serve as the site of photosynthesis. They contain chlorophyll, the green pigment that absorbs energy from sunlight for use in photosynthesis. Chlorophyll also gives green plants their color. In the fall, the production of chlorophyll in woody plants ceases. The colors of yellow pigments in the chloroplasts then become visible.


The chloroplasts of most plants are shaped like disks or lenses. Under a microscope, they can be suspended in the part of a cell called the cytoplasm. Except for the cell nucleus, chloroplasts are the most visible structures in a plant cell. Chloroplasts are one of several types of specialized plant-cell structures called plastids. Other plastids contain yellow, orange, or red pigments, and provide the colors of many flowers and fruits. Plastids also store oil, protein, and starch.