How a Leaf Makes Food 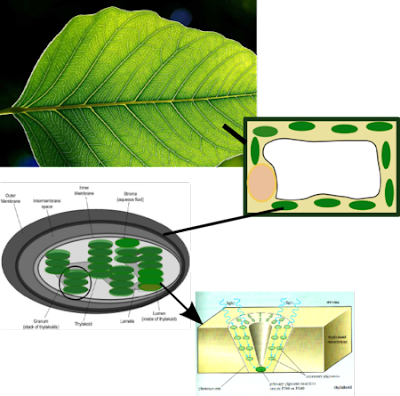 A green leaf is a marvelous food-making factory. Using only the energy of the sun, it takes simple materials and turns them into energy-rich food. This section describes how a leaf obtains the raw materials needed to make food. It then provides a simple explanation of how the leaf produces food through photosynthesis. Finally, this section discusses transpiration, a process of water loss that plays a key role in the operation of the leaf food factory.

Carbon dioxide enters a leaf from the air. The epidermis (outer surface) of the leaf has many tiny pores. These openings, called stomata, enable carbon dioxide to enter the leaf. Each pore is surrounded by two curved, bean-shaped guard cells that can swell and relax. When they swell, the pore is opened wide, and carbon dioxide enters the leaf. When the guard cells relax, the pore closes. In most plants, the stomata open during the day and close at night. A leaf has many stomata. For example, a cottonwood leaf may have 1 million stomata, and a sunflower leaf nearly 2 million. However, the pores are so small that they make up less than 1 percent of the leaf's surface. In most plants that grow in full sun, the majority of the stomata are in the shaded lower epidermis of the leaves. In many other plants, the stomata are about equally divided between the upper and lower epidermis.

Water. A leaf obtains water that has been absorbed by the plant's roots. This water travels up the stem and enters the leaf through the petiole. Tiny tubes in the leaf's veins carry the water throughout the blade. These tubes make up the vein's xylem (water-transporting tissue). The inside of the blade is very humid. The epidermis is covered by a waxy coating called the cuticle, which helps keep the leaf from drying out. Nevertheless, a leaf does lose much water. Most of it escapes as vapor through the stomata by the process of transpiration.

Light. Leaves cannot make food without light. But most leaves work best when the sunlight is at a certain level of brightness. If the light is too dim, the leaf will not make enough food. But if the light is too bright, it can damage the food-making cells. The leaves of many plants that grow in bright sunlight have an extremely thick cuticle, which helps filter out strong light and guards against excess water loss. The leaves may also have many threadlike structures called hairs growing out of the epidermis. These structures are not true hairs, which grow only on mammals, but they resemble hairs. Epidermal hairs further reduce the intensity of bright light. Such plants as geraniums and white poplar trees have so many epidermal hairs that they feel fuzzy.

Some plants, including the herbs, ferns, and shrubs of the forest floor, thrive in shade. The leaves of most of these plants have a thin cuticle and few epidermal hairs. These features allow as much of the dim light as possible to enter the leaves.

Photosynthesis occurs inside the leaf blade in two kinds of food-making tissues-palisade tissue and spongy tissue. The tall, slender cells of the palisade tissue are the chief food producers. They form one to three layers beneath the upper epidermis. The broad, irregularly shaped cells of the spongy tissue lie between the palisade tissue and the lower epidermis. Floating within both kinds of cells are numerous small green bodies known as chloroplasts. Each chloroplast contains many molecules of the green pigment chlorophyll.

Partly surrounding each cell of the palisade and spongy tissue is an air space filled with carbon dioxide, water vapor, and other gases. The cells absorb carbon dioxide from this air space. When light strikes the chloroplasts, photosynthesis begins. The chlorophyll absorbs energy from the light. This energy splits the water molecules into molecules of hydrogen and oxygen. The hydrogen then combines with carbon dioxide to produce a simple sugar. This process is extremely complicated and involves many steps. The oxygen that is left over from the splitting of the water molecules enters the air through the stomata.
The sugar produced by photosynthesis is carried in special tubelike cells that make up the vein's phloem (food-transporting tissue). The sugar moves through the petiole to the stem and all other parts of the plant. In the plant cells, the sugar may be burned and thus release energy for growth or other activities. Or the sugar may be chemically altered and form fats and starches. In addition, the sugar may be combined with various minerals, and so produce proteins, vitamins, and other vital substances. The minerals enter the plant dissolved in the water absorbed by the roots.

Transpiration occurs as the sun warms the water inside the blade. The warming changes much of the water into water vapor. This gas can then escape through the stomata. Transpiration helps cool the inside of the leaf because the escaping vapor has absorbed heat.

Transpiration also helps to keep water flowing up from the roots. Water forms a continuous column as it flows through the roots, up the stem, and into the leaves. The molecules of water in this column stick to one another. As the molecules at the top of the column are lost through transpiration, the entire column of water is pulled upward. This pulling force is strong enough to draw water to the tops of the tallest trees. In addition, transpiration ensures a steady supply of dissolved minerals from the soil. A plant may lose much water through transpiration. A corn plant, for example, loses about 4 quarts (3.8 liters) of water on a hot day. If the roots cannot replace this water, the leaves wilt and photosynthesis stops.  Next >>>