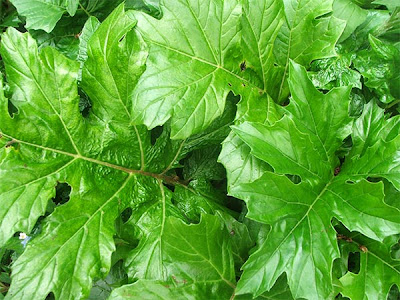 Leaves complete their growth within one week to several weeks, depending on the kinds of plants that produce them. At first, the unfolding leaf must get all its food from older leaves or from food stored by the plant. Soon, however, the young leaf turns a deeper green and begins to make its own food. Gradually, the leaf produces extra food, which is sent to the rest of the plant. During the growing season, the color of the leaf changes from bright green to a duller green. The leaf also becomes tougher because its cells develop thicker walls. During this time, a special change occurs in the leaves of deciduous trees and shrubs. A corky layer of cells known as the abscission zone develops where the stalk of the leaf joins the stem. This zone breaks down in autumn, causing the leaf to separate from the stem.

The leaf is green because it contains a green pigment (coloring matter) called chlorophyll. This pigment plays a major role in photosynthesis. The leaf also has other colors, but they are hidden by the chlorophyll. As autumn approaches, however, the shorter days and cooler nights cause the chlorophyll in deciduous broad leaves to break down. The hidden colors of the leaf appear as the chlorophyll breaks down. The leaf may then show the yellow color of the pigment xanthophyll or the orange-red tones of the carotene pigments. In addition, a group of red and purple pigments called anthocyanins forms in the dying leaf. The color of the autumn leaf depends on which of the pigments is most plentiful in the leaf.

After the chlorophyll breaks down, the leaf can no longer make food. The tiny pipelines between the leaf and the stem become plugged. These pipelines carried water to the leaf and food from it. The cells in the abscission zone separate or dissolve, and the dying leaf hangs from the stem by only a few strands. These strands dry and twist in the wind. When the strands break, the dead leaf floats to the ground. After the leaf falls, a mark remains on the twig where the leafstalk had been attached. This mark is called a leaf scar. The broken ends of the water and food pipelines can be seen within the leaf scar. On the ground, the dead leaf becomes food for bacteria and fungi. They break the leaf down into simple substances, which then sink into the soil. There, these substances will be absorbed by plant roots and provide nourishment for new plant growth.
The leaves in the winter buds stop growing during the summer and remain dormant (inactive) throughout the winter. During the winter months, the buds are protected from drying out by special outer leaves called bud scales. In spring, warmth and moisture cause the dormant leaves to become active. The bud scales drop off, and the leaves unfold.

The parts of a leaf
Most leaves have two main parts: (1) the blade and (2) the petiole, or leafstalk. The leaves of some kinds of plants also have a third part, called the stipules.

The blade, or lamina, is the broad, flat part of the leaf. Photosynthesis occurs in the blade, which has many green food-making cells. Leaf blades differ from one another in several ways. The chief differences are in: (1) the types of edges, (2) the patterns of the veins, and (3) the number of blades per leaf. The types of edges. Almost all narrow, grasslike leaves and needle leaves have a blade with a smooth edge. But the edge of broadleaf blades varies greatly among the different types of plants. Many broadleaf plants, particularly those that are native to warm climates, have smooth-edged leaf blades. The rubber plant, a common house plant, is a good example of such a plant.

The leaves of many temperate broadleaf plants have small, jagged points called teeth along the blade edge. Birch and elm trees have such leaves. In many plants, the teeth contain hydathodes, tiny valvelike structures that can release excess water from the leaf. The teeth of young leaves on many plants, including cottonwood and pin cherry trees, bear tiny glands. These glands produce liquids that protect the leaf from plant-eating insects. Some temperate broadleaf plants-including sassafras trees and certain mulberry and oak trees-have lobed leaves. The edge of such a leaf looks as if large bites have been taken out of it. The lobing helps heat escape from the leaf.
The patterns of the veins. Veins are pipelines that carry food and water in a leaf. If you hold a leaf blade up to light, you can see the pattern of its veins. In most broad leaves, the veins form a netlike pattern, with several large veins connected by many smaller ones. The smallest veins supply every part of the blade with water. They also collect the food made by the green cells. There are two main types of net-vein patterns-pinnate (featherlike) and palmate (palmlike or handlike). Pinnately net-veined leaves have one large central vein, called the midrib, which extends from the base of the blade to its tip. Other large veins branch off on each side of the midrib. The leaves of beech, birch, and elm trees have such a vein pattern. A palmately net-veined leaf has several main veins of about equal size, all of which extend from a common point at the base of the blade. The vein patterns of maple, sweet gum, and sycamore leaves are palmate.

Narrow leaves and needle leaves are not net-veined. Narrow leaves have a parallel-vein pattern. Several large veins run alongside one another from the base of the blade to the tip. Small crossveins connect the large veins like steps on a ladder. Needle leaves are so small that they have only one or two veins. These veins run through the center of the blade. Leaf veins do more than carry water and food. They also support the blade, much as the metal ribs support the fabric of an open umbrella. The veins are tougher and stronger than the green tissue around them. They help the leaf keep its shape and prevent it from collapsing or tearing. The number of blades per leaf. A leaf may have one or more blades. A leaf that has only one blade is called a simple leaf. Apple and oak trees, grasses, and many other kinds of plants have simple leaves. A leaf that has more than one blade is known as a compound leaf. The blades of a compound leaf are called leaflets.

The petiole is the stemlike part of the leaf. It joins the blade to the stem. Within a petiole are tiny tubes, bound together tightly like a bundle of drinking straws. These tubes are a continuation of the midrib veins. Some of the tubes carry water into the leaf. Others carry away food that the leaf has made. The leaves of many plants have petioles that grow extra long if the blades are shaded. For example, white clover plants growing among unmowed grass may have petioles up to 6 inches (15 centimeters) long. These long petioles lift the clover leaflets into the sunlight. In a lawn where the grass is kept short, the clover petioles may measure less than 1 inch (2.5 centimeters) long. In many trees and shrubs, the petioles bend in such a way that the blades are turned to receive the most sunlight. As a result of this bending, few of the leaves are shaded by other leaves. The petiole also provides a flexible "handle" that enables the blade to twist in the wind and so avoid damage. In some plants, the petioles are much larger than the stems to which they are attached. For example, the parts we eat of celery and rhubarb plants are petioles. In contrast, the leaves of some soft-stemmed plants, particularly grasses, have no petioles.
The leaflets in a compound leaf may be arranged in a pinnate or palmate pattern. In pinnately compound leaves, the leaflets grow in two rows, one on each side of a central stalk, called the rachis. Plants with pinnately compound leaves include ash and walnut trees and garden peas. The leaflets in a palmately compound leaf are attached at the tip of the leafstalk. Clover, horsechestnut trees, and many other plants have palmately compound leaves. A few plants-including carrots, honey locust trees, and Kentucky coffeetrees-have double compound leaves. In double compound leaves, each leaflet is divided into a number of still smaller leaflets. One double compound leaf looks more like a group of twigs and leaves than like a single leaf.

The stipules are two small flaps that grow at the base of the petiole of some plants. Many stipules look like tiny green leaf blades. In some plants, the stipules grow quickly, enclosing and protecting the young blade as it develops. Some stipules, such as those of willows and certain cherry trees, produce substances that prevent insects from attacking the developing leaf. In many plants, the stipules drop off after the blade has developed. But garden peas and a few other kinds of plants have large stipules that persist and become an extra food-producing part of the leaf.