The mineral and organic particles in soil are called soil particles. Water and air occupy the spaces between the particles. Plants and animals live in these pore spaces. Plant roots also grow through the pore spaces.

Minerals supply nutrients to green plants. Particles called sands, silts, and clays make up most of the mineral content of soils.

Sands and silts are particles of such minerals as quartz and feldspars. Clays consist of illite, kaolin, micas, vermiculite, and other minerals. Trace amounts of many minerals add nutrients, including calcium, phosphorus, and potassium, to the soil. Most soils are called mineral soils because more than 80 per cent of their soil particles are minerals. 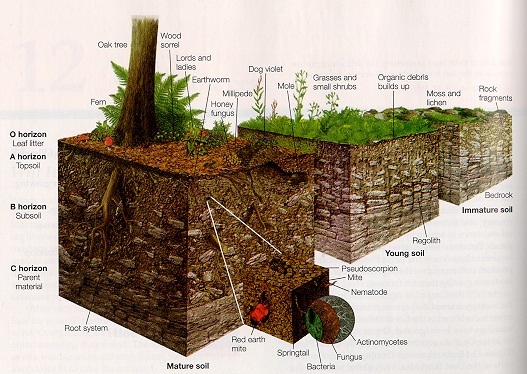 Plant and animal matter consists of organic material in various stages of decay. Many organisms also live in the soil. These soil organisms include plant roots, microbes, and such animals as worms, insects, and small mammals. Bacteria, fungi, and other microbes decompose (break down) dead plants and animals. Many soil organisms help mineral and organic particles aggregate (come together) and form clumps of soil. Roots, burrowing animals, and natural weathering break apart large clumps of soil.

Decaying organic material releases nutrients into the soil. In addition, some organic material combines with mineral particles. Other decaying material forms organic soil particles called humus. Most humus is black or dark brown, and it holds large amounts of water. Only 6 to 12 per cent of the volume of particles in most mineral soils is organic. However, these small quantities greatly increase a soil's ability to support plant life. In some soils, called organic soils, more than 20 per cent of the soil particles are organic.

Water that enters the soil dissolves minerals and nutrients and forms a soil solution. Much of the solution drains away, but some remains in the pore spaces. Green plants obtain water and some nutrients by absorbing soil solution through their roots.

Air replaces the water that drains from the larger pore spaces. Soil organisms live best in soils that contain almost equal amounts of air and water.