Birds of Asia and Africa 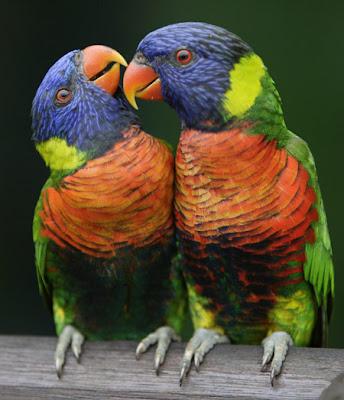 Asia, the largest of the world's continents, has a wide variety of climates. These include tropical rain forests, temperate forests, deserts, marshlands, and Arctic tundra. Such birds as broadbills, fairy-bluebirds, fruit-doves, hornbills, and leafbirds inhabit Asian forests. The male rhinoceros hornbill, like other tree-nesting hornbills, walls up his mate into a nest hole while she incubates the eggs. The golden-fronted leafbird lives in monsoon forests, which have a long dry season followed by a season of heavy rainfall. The trees in a monsoon forest usually shed their leaves during the dry season and leaf out again at the start of the rainy season. The golden-fronted leafbird feeds on fruit and insects. The blue-backed fairy-bluebird and the lesser green broadbill eat mainly fruit. Many tropical southeast Asian birds, such as the blue-winged pitta and purple-throated sunbird, have multicolored plumage.

The Himalaya, the great mountain range in southern Asia, is a biologically rich area with many species of birds. The foothills of the Himalaya provide a home to several brightly colored members of the pheasant family, including the Himalayan monal and Lady Amherst's pheasant. The Himalayan monal lives in forests above 10,000 feet (3,000 meters) high. The male has a loud ringing call. The common myna inhabits dry hillsides in India.

Some cultivated areas of Asia have become habitats for such species as the coppersmith barbet and the Java sparrow. The coppersmith barbet lives in open woodland, including orchards and gardens. It has a distinctive, monotonous "tonk" call, which it repeats over long periods. The Java sparrow was originally native to the islands of Bali and Java but has been widely introduced to other regions. It commonly resides in open areas, including rice fields, and has become a popular pet.

The Sahara, a vast desert, stretches across northern Africa and separates the continent's northern Mediterranean coastline from the land to the south. As a result, Mediterranean Africa shares many bird species with southern Europe. South of the Sahara, much of Africa has a tropical climate and a richer bird life. Rain forests provide homes for such colorful birds as the emerald cuckoo, yellow-bellied wattle-eye, and hammerkop. Many kinds of weavers live in open woodlands. The tropical grasslands have two of the world's tallest birds, the ostrich and the secretary-bird, as well as guineafowl and the crowned crane. Water birds of tropical Africa include the shoebill, the African fish-eagle, and various ducks, jacanas, kingfishers, and pelicans. Madagascar, a large island off the southeast African coast, has many unique birds, including the cuckoo roller and the helmet vanga.